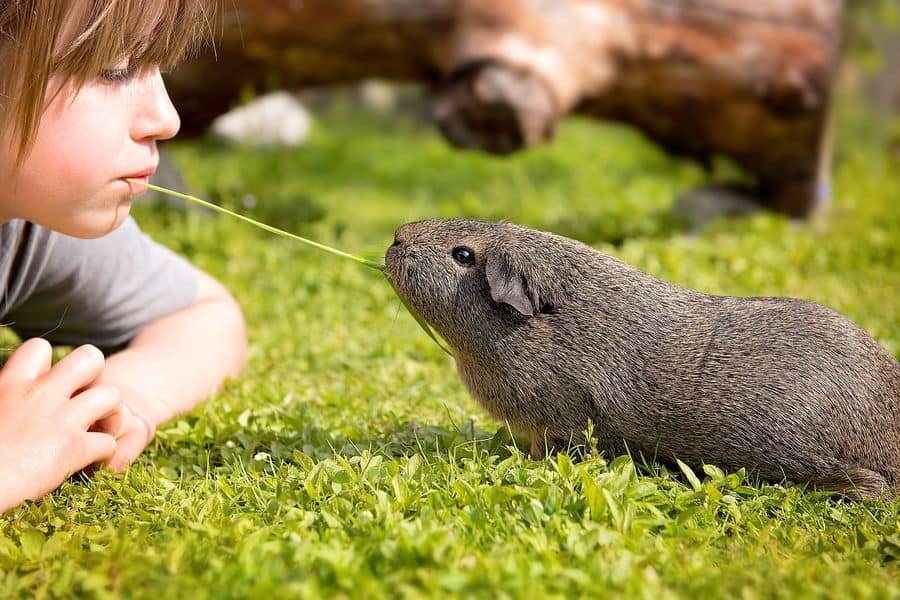 Guinea pigs are lovable and adorable pets. We can agree that they are intelligent creatures that can distinguish their owners by their voices and smell. Most of their friendly traits beg the question, do guinea pigs have feelings?

Do Guinea Pigs Have Feelings?

Yes, guinea pigs have feelings can love their owners. This answer comes from judging the responses of guinea pigs towards their owners and comparing them to those of strangers, making it safe to come to such a conclusion. Guinea pigs can also express their love towards other guinea pigs that they socialize with constantly.

Once you have successfully relocated your guinea pig to its new home, you should allow some time to pass before your guinea pig starts showing you any emotions besides fear. This fear from the guinea pig is a survival reaction that comes from viewing you as a threat to its life. Given enough time, your guinea pig should start relaxing as it gets used to you as its main source of food, water, and protection.

How Guinea Pigs Show Their Affection Towards Their Owners

Typically, it takes anywhere from three to eight months for your guinea pig to be completely relaxed around you. The varied timeline majorly depends on the guinea pig’s personality. This relaxation comes after weeks of your guinea pig adjusting to its new environment hence its heightened instincts.

There seems to be skepticism towards the ability of guinea pigs to bond with their owners despite them being some of the most popular pets, even around the Elizabethan societal era. Pet owners were expecting guinea pigs to behave like popular pets such as dogs and cats. However, rest assured, guinea pigs are perfectly able to feel affection towards others, though the methods may differ from normal.

Guinea pigs are excellent pets as their demeanor is known to aid their owners in battling depression and anxiety. Some of the ways you can tell your guinea pig loves you include:

Nibbling or Licking You

During the first days, guinea pigs often bite their owners as a way to wade off threats to them. However, once it starts gently nibbling you or licking you, you can be sure of its affection towards you. You might be well on your way to having the guinea pig fully domesticated and used to you.

Eating From Your Hand

A major indicator of a guinea pig’s affection is its willingness to lower its guard enough for it to want to eat from your hand. As much as this is a friendly trait, it might be better to have your guinea pig pet eat from its bowl.

You can let the guinea pig eat from your hand and savor the moment when your guinea pig is showing you trust. However, you should note that feeding your pet from its plate instills meal discipline into your pet.

Sleeping With Eyes Shut Around You

In the wild, guinea pigs tend to sleep with their eyes open to indicate to their predators that they are aware of their surroundings. However, in environments in which they feel loved, they tend to close their eyes. Shutting their eyes can happen when you cuddle with your pig or on random occasions.

Resting in Your Hands

Expressing Interest in You

This behavior is best expressed whenever you get home from work, school, or vacation. Normally, the guinea pig would stay indifferent or actively try to hide from you. However, now it tends to pay attention as you talk to it.

When you allow it to roam away from its cage, it tends to follow you around as it feels safe around you. The guinea pig can also start climbing onto your body as a way of wanting to show affection.

Does a Guinea Pig Recognize Its Owner?

Yes, guinea pigs can feel love. Having a guinea pig as a pet can tend to seem a thankless task or even a one-sided affair. However, do not be discouraged as guinea pigs may display their affection in ways different from other domesticated animals. Just look for the signs, such as calmness.

Can Guinea Pigs Be Sad?

Yes, guinea pigs can be sad. Melancholy or sadness is an emotion that portrays itself in the spectrum of emotions that a guinea pig may feel. Guinea pigs might seem like simple creatures, but they feel sad and melancholy from time to time, and you may not even notice it unless you are keen on your guinea pig’s behavior.

We have been able to determine that guinea pigs indeed do have emotions. Though they might express their emotions in challenging ways for a new guinea pig owner to understand, they always try to communicate with their owners.