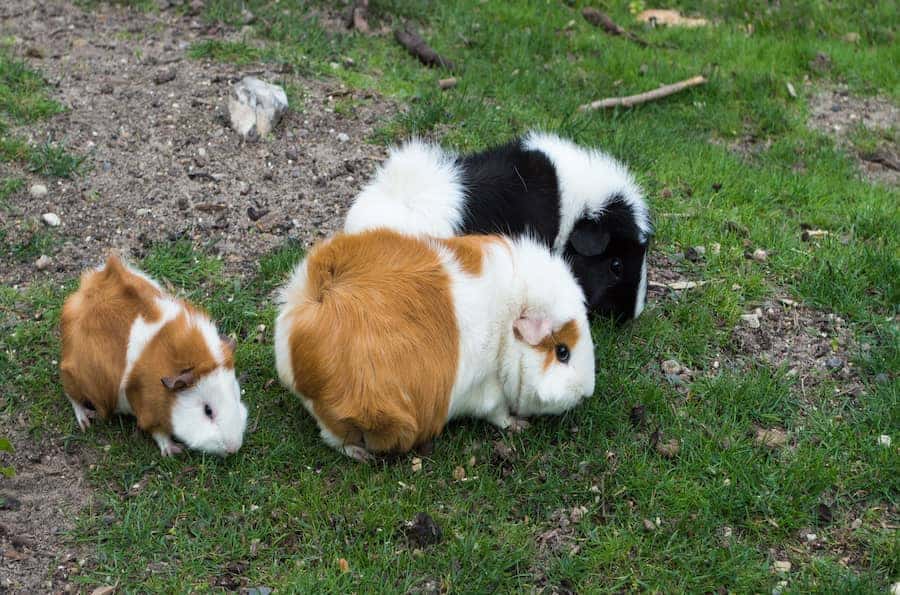 Guinea pigs are adorable and exciting creatures. With their popularity spanning up to the British aristocracy, one is bound to be interested in their anatomy. A general question most people ask is, do guinea pigs have tails?. If your cavy does not have a tail, did its ancestors have one? Also, if guinea pigs’ ancestors had tails, why do the contemporary ones not have one?

Do Guinea Pigs Have Tails?

No, guinea pigs do not have tails. Though guinea pigs possess tailbones, they do not have any visible tails. In some cases, your guinea pig might sport a “tail” which might end up being a cowlick or some hair sticking out. Guinea pigs evolved past the need for tails, just as a human.

In this article, we will discuss the anatomy of the guinea pig by studying its skeletal structure. You will learn of the theory of the guinea pig’s ancestor, whether the ancestor had a tail, and what happened to the tail during the cavy’s evolution.

The Anatomy of a Guinea Pig

The average guinea pig has a skeleton made up of 258 bones. The skeleton is divided into two parts: the axial and the appendicular.

The axial portion of a guinea pig’s skeleton consists of the skull, hyoid apparatus, vertebrae, ribs, and sternum. The skull bones protecting the brain are flattened, consistent with other mammals. The ribs and sternum protect vital organs such as the heart and lungs.

Your guinea pig’s spinal cord or vertebral column is made up of 32 to 36 vertebrae. These vertebrae help in protecting the significant nerves from major shock and injuries.

The appendicular part makes up the bones used in the movement or the handling of objects. They comprise the pectoral and pelvic girdles. The pectoral girdle anchors the front legs to the rest of the skeleton while the front limbs have 43 bones, with the third digit having a strong, curved claw.

The pelvic girdle hinges the hindlimbs to the skeleton. The hindlimbs consist of 36 bones that assist in supporting the weight of your guinea pig. Providing enough power for the guinea pig to move and forage for food is another primary use for the hindlimbs. Same as the forelimbs, the hindlimbs’ third digits also have curved claws.

The guinea pig possesses seven tailbones that are neatly fused and tucked under the pelvic girdle. This trait is also shared with other tailless mammals, mainly humans. Despite being part of the Rodent family, guinea pigs have evolved past the need for tails.

Evolution of the Guinea Pig and It’s Tail

One theory proposes that the survival of guinea pigs against predation might have depended on having short or no tails. Subsequent mating and breeding of the mutated pigs led to the eventual erasure of guinea pigs with tails. Despite the lack of scientific proof that guinea pigs had long tails at one point, they were still able to adapt to their environment, prosper, and multiply.

Your guinea pig evolved past the need for a tail by burrowing themselves in the soil to conserve their heat. They also have a large and low center of gravity that allows them to maintain balance effectively. All these adaptations prove the resilience of your guinea pig.

You may sometimes be mistaken in seeing a guinea pig with a tail. Unless your cavy has a rare genetic defect, your guinea pig should have no tail as they all share the same skeleton structure.

The tail you may have seen is, instead, a “fake tail.” The fake tail may be tufts of long hair fanned out to look like a beautiful tail. Such a phenomenon is expected in the Peruvian guinea pig breeds. Cowlicks in the guinea pig’s coat are known to cause such tails, and you can tame them through regular brushing of the hard coat.

Why Do Guinea Pigs Not Have Tails?

As guinea pigs evolved, they suffered a gene mutation that caused a decline in their tail growth. With time, these genes spread as the guinea pigs with small or no tails mated, eventually leading to the deterioration and eventual erasure of guinea pigs with tails. However, the presence of fused tailbones proves that guinea pigs once had a tail in the past.

How Does a Guinea Pig’s Tail Look?

Guinea pigs do not have tails. However, their tailbones are tucked under the pelvis. They have vestigial tailbones similar to a human’s coccyx.

Guinea pigs are exceptional pets, what with their easy maintainability. Your guinea pig does not have a tail, but it has adapted to living without one just fine. Your cavy also possesses seven vestigial tailbones, proof of its ancestors once having tails. Despite having no tail, guinea pigs are dependable and intelligent balls of fur that are sure to brighten up your home and life.