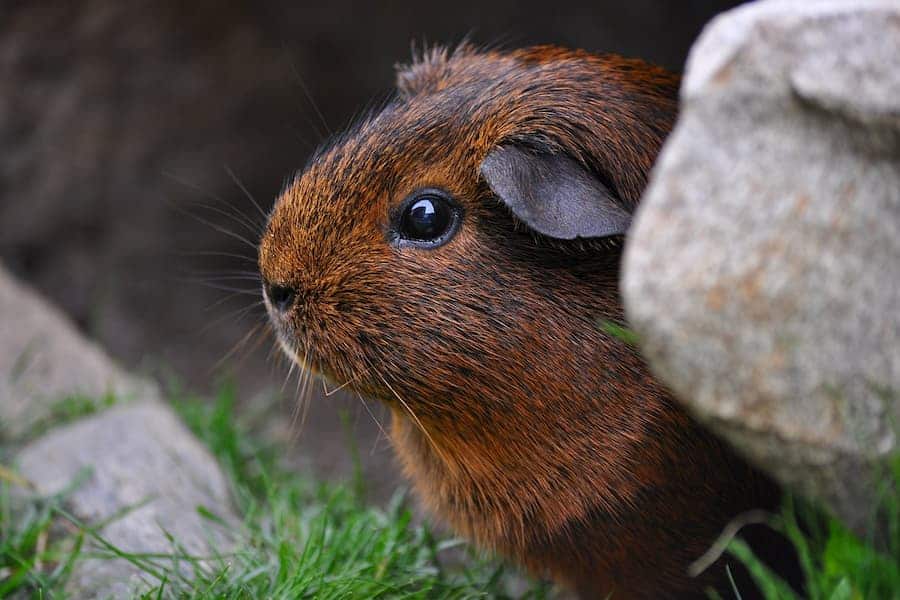 You must have often heard your little guinea pig scurrying around in its cage, chattering, munching on hay, or slurping water in the middle of the night. Cavies can go about their business at any time of the day, whether day or night, which leads to the question; do guinea pigs like the dark?

Yes, guinea pigs do like the dark, as evident by their nighttime activities. The reason for their preference for darkness is that guinea pigs are prey animals. They are always on the lookout for predators and ways to evade them.

Daylight makes them feel vulnerable to the predators’ attack, while darkness provides them the opportunity to hide.

A pitch-black environment can actually help them calm down and relax, as they feel secure and sheltered in the darkness. Consequently, you may have noticed your cavy hiding away during the day and being a busy body during the night while the entire household slumbers.

Do Guinea Pigs Need a Nightlight?

No, you do not need to install a nightlight near their enclosure. Guinea pigs are pretty competent in finding their way around in the darkness due to their sharp memory and senses. These instincts help them run away from their predator, even at night.

Also, guinea pigs can even sleep with their eyes open to be vigilant.

In fact, the presence of excessive light during the darker part of the day can have a negative impact on their health. It can distract their internal body clock, disrupting their normal sleeping pattern.

Can Guinea Pigs See in the Dark?

Although guinea pigs can manage to navigate around their cage, it is assumed that they cannot see in the dark. Guinea pigs do not have excellent vision. They are shortsighted, and anything beyond 3 to 5 feet will appear blurry to them.

Their depth perception isn’t quite strong, so they are unable to judge the distance and height accurately. Thus, if you ever try picking them up without a solid base under their feet, they might appear stressed and afraid.

How Do Guinea Pigs Find Their Way Around at Night?

While guinea pigs have poor vision and lack depth perception, they have an estimated 340-degree field of vision. This impressive widescreen view is especially useful for wild guinea pigs. It helps them notice the predator, so they can run away and hide.

Guinea pigs can also see the world in colors and more images per second compared to humans.

In addition, they rely on their other senses to navigate at night:

There is more to the adorable little whiskers on your cavy’s pet than evident. Known as vibrissae, the guinea pigs’ facial hairs have sensory nerves at the ends. Guineas use the whiskers:

Guinea pigs’ sense of smell is quite acute. Their sense of smell helps them recognize other animals and humans, communicate with fellow guinea pigs, detect food, and identify the presence of imminent danger. The heightened sense of smell also entails that artificial odors and kitchen fumes aggravate their nose.

Guinea pigs also have a highly developed sense of hearing. This extraordinary ability helps them navigate through a space and be aware of their surroundings and potential nearby threats.

While the excellent sense of hearing is a useful skill, it can also cause the guinea pigs to feel stressed when there are loud noises around the house.

Guinea pigs are also believed to have excellent spatial memory. This means that they are highly proficient at remembering the position of a particular object and which route to take to reach it.

Guinea pigs, which cohabitate, have a better spatial memory than domestic ones who live alone. This ability helps the guinea pigs escape their predators. Since they remember the path to a hiding hole, they are able to run towards it even in the dark.

Moreover, guinea pigs have feelings which can also express their love towards other guinea pigs.

Guinea pigs prefer the darkness compared to daylight and want to be awake during this time. However, they are not nocturnal creatures. They are crepuscular, so they are most active during twilight hours.

Do Guinea Pigs Like to Sleep in the Dark?

Yes, guinea pigs prefer to sleep in the dark, but that does not mean they want to sleep at night. When a guinea pig wants to sleep, it will tuck itself in its nesting box or borrow in a pile of hay to feel safe.

Do guinea pigs like the dark? The answer is guinea pigs like darkness more than brightness, as it makes them feel calm and secure. Since they are prey animals, they feel sheltered against the predators in the dark.

On the other hand, daylight can stress them out and make them feel exposed to the threat.